Why You Should Judge Contests

It’s contest season!  A very exciting time for journalists (even those who claim they don’t care for awards).  Undoubtedly you or your colleagues are sifting through the past year’s coverage, seeking diamonds among the gold nuggets (and some clumps of sod, sure) to ensure the best shot at victory.

While many pubmedia types are content to submit their station’s work and wait patiently (ha!) for the returns, you might just get an invitation to help judge a contest.  Should you accept?

Sure, it’s an extra thing on your to-do list that’ll probably involve time outside your daily activities. But as someone who’s judged many regional and national contests in many years in the biz, let me tell you why you should:

Think of it as a free tutorial in how others produce their best work. You might be inspired by how a reporter interjects bursts of sound (a.k.a. posts) between brief descriptors of action.  You might pick up how to effectively write an ending, a common challenge for many journalists.  A provocative, issue-driven piece could help you see how conflicting views are presented in ways that are balanced and fair.  An innovative audio postcard or compelling self-narrative could prompt you to experiment with new ways of sound-gathering or storytelling.

Conversely, you can learn how NOT to do stories.  Even in contests, there are occasional turkeys that surface.  One reporter submitted a story about a fallen soldier, which featured what should have been a moving, heartfelt actuality of his grieving mother.  The only thing was, the reporter didn’t mute his phone so the sound of his keyboard clacking away and him coughing over her several times made it sound crass and impersonal.  In another submission, a reporter admitted hiding their recorder under a desk to catch immediate responses to a court verdict, which I’m sure elicited some revealing – but unethically gathered – sound (spoiler: this entry didn’t win).

Finally, accomplished and well-known reporters in your contest area often submit as well, so it’s a great time to examine their work and learn a few pro tips from…well, the pros!

Reason 2:  You get to reward – and reinforce – great reporting

Think of it as being a secret influencer.  As a judge, you get to recognize and lift up reporting that went the extra mile, created a new standard, or broke new ground. People take note of winners, and often want to emulate their style.  Highlight the great investigative story that involved open records requests, dissection of data, and the pressing of officials.  Champion the “Use of Sound” entry that had the reporter gather fresh audio in the field that demanded effort, innovation, and patience.  Celebrate a well-planned series that successfully rolled out multiple reports touching on a common theme or event.

Note: Some contestants think that if they’ve reported on a major story or featured a very prominent person, they’ve already cinched a top award.  Not true!  I once judged an interview between a radio host and an acclaimed writer. The questions were softballs, the discussion uninspired, and I learned little of the writer’s latest work that I couldn’t glean from the dust jacket.  By contrast, I judged another host’s interview with a local old timer whose humorous and philosophical insights on changes in his hometown left me fascinated.  This townsperson will never be a social media sensation or appear on the cover of Variety, but their ability to weave an engrossing yarn and the interviewer’s talent for asking revealing, in-depth questions blew away the “A list” celebrity entry hands down.

Reason 3 – You can help an organization, and yourself

Groups like PMJA, RTDNA, and your local SPJ are devoted to journalism’s best practices, and often rely on volunteers. By helping them out, you not only get to be useful, but you can develop professional friendships and expand your network, in addition to learning new methods and strategies for your newsroom.  I’ve stayed in touch with several terrific colleagues through the decades from judging.

So that’s why I recommend you sign up to judge media contests.  Now I’ll share a few ways I approach it.

The Snooze Button:  Early on, I felt compelled to evaluate entries thoroughly, from start to finish. I felt that if the reporter and their editor spent so much time putting together a feature, who was I not to give their submission my full attention?  But I often found myself sitting through a fair number of dry, flat, and frankly boring pieces that either saved their most compelling tape for the every end, or never had any payoff to begin with.  I’ll never get that time back.

Today, I judge like a listener. I expect to be hooked by the lead, drawn in early by a captivating scene or voice, and given sufficient “gold coins” (interesting discoveries or disclosures) along with the relevant information. That should keep me engaged until the piece’s tail end. But if a full minute or two passes and I’m nodding off or confused where things are going, I click “STOP” and move on to the next entry.  If an average listener (who the report was originally made for, not a contest judge) can’t stick with the piece, why should I be any different?

Sounding Off About Audio:  One of my favorite categories – Best Audio/Use of Sound – has differing camps.

One I call the “open mic” camp.  This is where a reporter goes to an event or place bursting with available ambience, and essentially hits “RECORD”.  The city whose local sports team has won a major championship is a recurring example. This piece is filled with cheering, ecstatic fans, maybe a police siren in response to an overturned dumpster or rowdy group of revelers, and likely a cut of a victorious coach or player.   It’s lively and fun sound, but also pretty easy to grab.

Another camp is the “record spinner”.  These are almost always tribute or anniversary features about a band or orchestra that use existing recordings sitting on a DJ’s shelf and have little original audio (Cliché Alert: The 1959 deaths of Buddy Holly, Ritchie Valens, and the Big Bopper in a plane crash – while tragic and momentous – never fails to spark commemorative pieces that open with Don McClean’s The Day the Music Died.  Resist this impulse if you’re aiming to do something that stands out.)

These pieces are generally well-mixed, and in the case of tribute/anniversary stories elicit deep pangs of nostalgia. But I also am reluctant to bestow an award upon open mics and record spinners if there’s an entry from the third camp, which I call “The Sweaty Mic.”  This is a submission where the reporter left the station, gathered all ambi and (most, if not all) interviews in the field, capturing sounds that are up-close, paint the scene, and demonstrate real effort.  One contest I judged a long time ago had competing submissions from two local stations that covered the same rural flood.  One reporter raced out and got ankle deep in the mud, talking to witnesses and recording sounds of chainsaws, tow trucks, and people sorting through what used to be their homes in the aftermath.  Another reporter from the rival station had tape (lots of it over the phone or at staged briefings) from officials on relief efforts and assessments.  Both were informative, but which reporter won the award for best breaking news/continuing coverage?  (Hint: the one with the ruined dress shoes).

This isn’t to say the Open Mic and the Record Spinner can’t win in my book. Again, I just favor effort and innovation.

The Rebel Pen:  Writing is my other favorite category.  I know it’s been said (also by me) that solid broadcast writing is concise, avoids clichés, and ducks fancy words that drive listeners to their dictionaries. That’s great advice, though my other rule is to master enough of your craft so you know when to break the rules effectively.  Puns, double meanings, alliteration, and even the forbidden cliché can make a story entertaining as well as informative. The trick is not to get carried away in trying to be too clever or cute, so a trusted editor or colleague who can reel you back is important.

On a related note, it’s important to keep the tone of your writing aligned with the story you’re covering. Witticisms and casual, flippant language work great for a soft feature about a dog show or outhouse race, but you wouldn’t use that tact for covering a train derailment or crime story.  On the flip side, serious and reserved writing for what should be a fun and lighthearted piece (often paired with somber or disconnected delivery) can nosedive it fast.

Diversity Beyond the Calendar:  If you’re covering an underrepresented community, your sensitivity, authenticity, and rapport with that community should be apparent.  Sincerity goes a long way, too.  One thing that drives me crazy is diversity reporting that is largely pegged to certain times of the year.  Think African-American coverage that only happens on MLK Jr. Day or Black History Month, or Native American stories that surface around Thanksgiving. These communities are active year-round, seek them out ahead of the predictable, formal observations.

On a related note, some communities – especially religious ones – have complained that the only time the media seems interested in their perspective is when something terrible has happened, like after a swastika’s been carved onto a synagogue’s doors, or someone tears off a woman’s hijab. These are very serious incidents, but if you wish to prove that you’re truly dedicated to covering underrepresented groups, foster those connections ahead of such conflict. 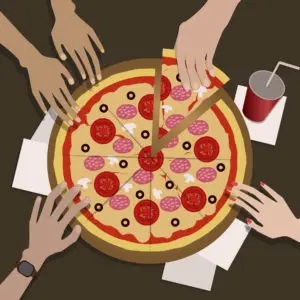 Ain’t No Party Like a Judging Party:  Evaluating contest entries is a serious business, but that doesn’t mean you can’t have fun.  I’ve invited colleagues to help judge entries over take-out and beverages (coffee, I promise!) It’s an informal way to huddle and discuss what makes something stand out over the rest.  And people can learn firsthand what makes a submission work, versus having you relate it to them later.

So there you go! Hopefully I’ve swayed you to jump in and judge. You’ll gain insights into what makes an award winner, connect with your colleagues, and pizza parties around the radio is never a bad way to spend an afternoon.  Canadian bacon and pineapple, anyone?

Send an email to judge the PMJA Awards 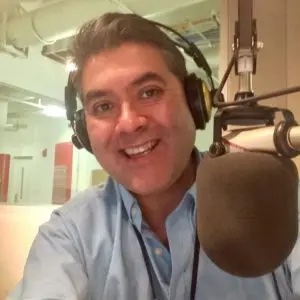 Brian Bull is currently a reporter at KLCC. In his 24 years in the biz, he’s left footprints at many public radio stations across the upper Midwest and at NPR’s Washington DC location. He’s not only judged some important contests, but has won several including the PRNDI-NEFE Excellence in Consumer Financial Reporting Award and 14 Edward R. Murrow Awards (four national). When not covering events and issues across Oregon, he’s trying to teach his cats how to copy edit (his teenage children have stopped listening to him).
WEBINAR AVAILABLE: Turning Radio Scripts Into Great Digital JournalismFebruary 20, 2020 Maria Hinojosa Will Receive PMJA’s 2020 Leo C. Lee AwardFebruary 13, 2020